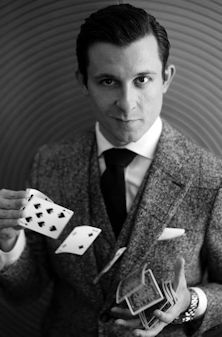 LEE TERBOSIC is a nationally touring magician, comedian mind reader, actor, daredevil and entertainer who is proving that anything is possible! He’s wowed some of Hollywood’s biggest stars like Aaron Paul, Jack Black, Wiz Khalifa and Michael J. Fox, and has appeared on America’s Got Talent on NBC, Four Weddings on TLC and Now You See It on the BBC. In 2016, Lee performed his biggest stunt to date with “Houdini100” a tribute to Harry Houdini’s death defying upside down straight jacket escape in downtown Pittsburgh which captured the attention of a world wide, live audience. With performances for Fortune 500 companies, A-list events and major Universities each year, Lee is one of the busiest entertainers in the county.

In 2019, Lee starred in the Discovery Channel series Houdini’s Last Secrets which featured Lee traveling the world with George Hardeen, Houdini’s great grand nephew, uncovering incredible secrets about the Houdini family and his magic. Lee was put to the test in this docuseries, attempting some of Houdini’s deadliest stunts including the Bullet Catch, Buried Alive Escape and the Water Torture Cell Escape. Lee’s live show is an amazing mix of sleight of hand, mind reading, comedy, illusion, music and story telling all rolled together into one unforgettable night.

MUST BE 21 OR OLDER ONLY TO ATTEND!