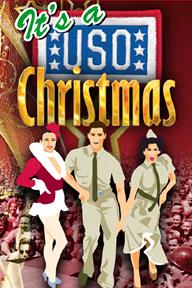 Nostalgia takes the stage as The Strand presents a concert event saluting those famous USO shows produced for our troops overseas back in the 1940s and 50s.  Expect non-stop music, comedy and ‘backstage’ hijinks.

t’s a USO Christmas harkens back to the beloved variety shows made famous by the likes of Bob Hope, Bing Crosby, Marilyn Monroe, and The Andrews Sisters.  We honor these heroes of yesteryear with a fictional cast of characters and a story that weaves between on-stage performances and peaks ‘behind the curtain.’

The Emcee is the wise-cracking song and dance man, trying to keep his stars in line and the troops entertained. The Starlet is a voluptuous bombshell that handles anything from the sultry ‘Santa Baby’ to the warm-hearted ‘Christmas Song’. The Broad has soul, wit & heart wrapped up in a bawdy, funny gal. She’ll make you laugh, then break your heart. The GI is young, handsome, idealistic, and sings like an angel.

It’s A USO Christmas is a show whose audience enthusiasm has grown every year since its debut.  It continues to find new fans while others make it a part of their annual Christmas traditions, just like A Musical Christmas Carol or The Nutcracker.  But this is an EXCLUSIVE production of The Strand.  If you don’t see it here, you won’t see it anywhere else!

We are thrilled to announce that The Strand is now an OFFICIAL charitable donor to United Service Organization, Inc (USO), and a portion of all ticket proceeds will benefit this tremendous organization. It’s an honor and a privilege for this production to be recognized officially by USO!

USO is a registered trademark of the United Service Organizations, INc. (USO), a congressionally chartered, nonprofit charitable organization, which has authorized the use of its name for this program.  Such authorization does not constitute an endorsement by USO.