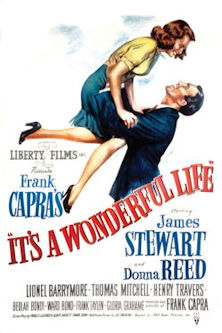 A man contemplating suicide is visited by an angel, who shares what his home town would have been like if he had never existed.

The Strand is delighted to bring back what most consider to be THE quintessential Christmas movie, even though it wasn’t released with that in mind.  In fact, upon its initial release in late 1946, It’s a Wonderful Life was considered to be a flop!  It wasn’t even meant to be released at Christmastime, but was rushed into distribution when Technicolor was unable to deliver prints of RKO’s scheduled release of Sinbad, The Sailor.

Of course, since then, the film became a cherished holiday tradition in the U.S. Due to a clerical error at NTA’s copyright office, the copyright wasn’t renewed when it expired in 1974. The film became public domain, meaning anyone who could obtain a print could broadcast it without paying royalties. Local stations aired it dozens of times between Thanksgiving and Christmas Day. In the 1990’s, after a series of court battles, NTA’s successor, Republic Pictures, re-acquired the rights to the film because they owned the source material (“The Greatest Gift”) and the film’s score, which were still copyrighted.

For the scene that required Donna Reed to throw a rock through the window of the Granville House, Director Frank Capra hired a marksman to shoot it out on cue. To everyone’s amazement, Reed broke the window by herself. She’d played baseball in high school, and had a strong throwing arm.

The gym floor that opens up to reveal a swimming pool was real. It was located at Beverly Hills High School in Los Angeles.