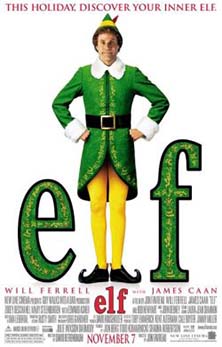 After inadvertently wreaking havoc on the elf community due to his ungainly size, a man raised as an elf at the North Pole is sent to the U.S. in search of his true identity.

One of the quintessential Christmas movies since it’s release in 2003, ELF has become a fan favorite at The Strand.  Enjoy it with the whole family on our bigger screen in 45 speaker surround-sound.

Will Ferrell caused several minor traffic accidents when walking through the Lincoln Tunnel in his costume because people were so surprised to see him wearing an elf outfit.  Also, on the final day of shooting in New York, it was just the director, Mike Favreau, Will Ferrell, and a camera man driving around the city looking for locations to shoot. They would jump out and ask pedestrians if they would be willing to be extras for some quick cash while Ferrell paraded around acting like Buddy. Much of the montage when Buddy first arrives in New York was filmed then, such as when he is getting his shoes shined and jumping between traffic.

The design for Santa’s Workshop as well as the Elf uniforms come from the originalRudolph the Red-Nosed Reindeer (1964) animated special. The Elf uniforms completely mirror the ones from the TV special. Most of the animals in the North Pole are also designed to look like the same form of stop motion animation used in Rudolph.