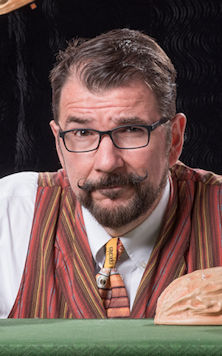 Join magician Doc Dixon for a fun, amazing, and INTERACTIVE comedy and magic show, LIVE ON STAGE! Now based in Atlanta, GA, Chris ‘Doc’ Dixon was born in the small steel town of McKeesport!

His life changed when, at the age of 10, he was given one of the all-time classic magic books, The Amateur Magician’s Handbook. Even after spending years as an EMT, in which he earned his ‘Doc’ nickname, the desire to make people laugh and make them disbelieve their own eyes never left him!

For the past 25 years, Doc Dixon has performed at clubs, resorts, and special events across the country. He FOOLED Penn & Teller on the hit TV show Penn & Teller: Fool Us.

Doc Dixon has performed on The Late Late Show with James Corden and has twice entertained at The White House. Magic’s #1 trade journal said, “Doc is one of the truly great working magicians and a hilarious performer. He is inspiring on every level.”