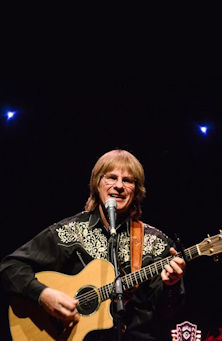 When Chris Collins first brought his tribute to music legend John Denver to The Strand in 2014, we had no idea what a phenomenon it would become. When he and members of Boulder Canyon performed here in 2016, the show had been Sold Out for over a month! For 2017, we added a matinee show, and BOTH Sold Out, and AGAIN in 2018 & 2019

Chris Collins is an award-winning singer & songwriter making his triumphant return following his previous Sold Out concerts with his tribute to pop music icon John Denver. Collins and Boulder Canyon have toured the country, delighting audiences with their talent, warmth and humor. They’ve toured from coast to coast, paying tribute to the music of John Denver. The band has generated much acclaim from audiences all over the country. Collins and Boulder Canyon are not an impersonation act, but seek to honor Denver’s legacy with fresh energy and musical integrity. Don’t miss this incredible tribute to a pop music legend featuring Collins and members of Boulder Canyon in an acoustic-style concert event.

It was the exposure from his original music that led to the chance meeting with his current band members; a path that he could not have anticipated. He found himself producing large shows at major theaters. John Denver’s music has provided him with an opportunity to play for audiences that he only dreamed of.

Chris recently was quoted as saying, “I frequently hear fans tell me what a gift I am to them. But the truth is, that the audience is a much greater gift to me, and we so appreciate their support.”