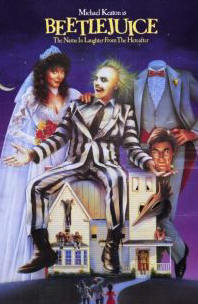 The spirits of a deceased couple are harassed by an unbearable family that has moved into their home, and hire a malicious spirit to drive them out. Michael Keaton has said that this 1988 Box Office Blockbuster is his favorite film in which he appears, which is surprising since he nearly turned down the role.  It took a meeting with Director, Tim Burton to help him understand the vision. According to Keaton, the Beetlejuice character was described to him as “having lived in every time period but no time period.” Keaton used this as the jumping-off point to create the character with such features as a shock hairdo, mold make-up, and large teeth.

He said that when he first showed up to the set as Beetlejuice, the crew was chanting: “Juice, Juice, Juice!” This got Keaton excited for his role, and the rest, as they say, is history!

Although the character’s true name is Betelgeuse, it was spelled “Beetlejuice” in the title because it’s funnier and markets better..