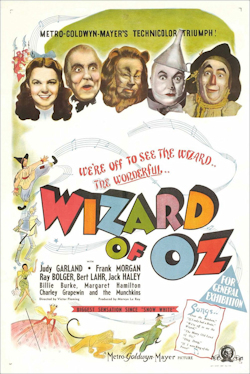 Relive the magic and imagination of this Golden Hollywood Classic, back on The Strand’s giant screen in digital surround sound! Make it a ‘Judy Garland’ Weekend with this beloved movie musical alongside the stirring tribute concert, ‘Love Finds Judy Garland’, live on stage, starring Joan Ellison! Over the Rainbow was ranked #1 on the American Film Institute’s list of the 100 Greatest Songs in American Film, but was nearly cut from the film! MGM felt that it made the Kansas sequence too long, as well as being too far over the heads of the children for whom it was intended.