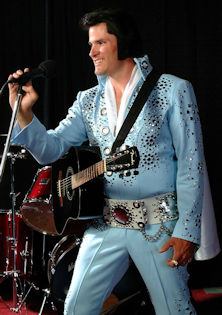 The Strand welcomes back Walt with his sterling Elvis Tribute AND his ‘Legends’ variety show!

In observance of the month of his passing, The Strand Theater is proud to welcome back one of the premiere Elvis Presley tribute acts in the country: Walt Sanders & The Cadillac Band!

Walt’s tribute to the iconic King of Rock is second to none. As a genuine fan, Walt has been perfecting his interpretation of Elvis since 1993. His heartfelt and passionate concerts have wowed audiences all over, and won him accolades from industry veterans that have worked directly with Elvis himself. His vocals and mannerisms are pure ‘King’! Even his costumes have been created and hand-sewn based on the original patterns!

But Walt is a multi-faceted and talented performer! While everyone knows him for his incredible Elvis tribute, Walt also covers rock and pop legends throughout the decades including Ricky Nelson, Gordon Lightfoot and Neil Diamond, just to name a few!

That’s why we’re delighted to welcome back Walt Sanders and the Cadillac Band with two different and distinct shows! The 7:30pm show is the full-on, full-tilt Vegas Elvis Presley tribute with two full acts showcasing The King’s legendary performances that put ‘the city of lights’ on the map; complete with full band, costume changes, and back-up singers.

The 2pm matinee showcases Walt’s versatility. The first act features songs by Diamond, Nelson and Lightfoot and other music icons, plus some of The King’s non-Vegas selections. But Elvis fans won’t be disappointed as the second act will see the over-the-top Vegas Elvis tribute that Walt is so famous for!

Whether you’re a rabid Elvis fan that wants the full-length two-act tribute, or if you’d prefer the variety show that still delivers the Elvis fix in the second act, The Strand has the Walt Sanders show for you! Pick your favorite or attend both!