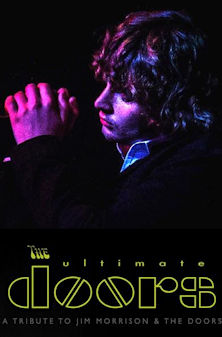 Tribute to Jim Morrison & The Doors.

The arrival of The Doors marks the moment when the American rock underground of the 1960s came crashing into the mainstream. The group's massive influence on the course of rock music carries on to this very day!

The Ultimate Doors pay tribute to Jim Morrison and The Doors by recreating the music, magic, and intensity of a live Doors concert. The group uses vintage gear, instruments, and costumes to recreate a stunning Doors experience like no other. They focus on all of the tiny details that made The Doors one of the most iconic rock bands of the 20th century.

From the eerie organ tones to the primal jazz drumming to the powerful, other-worldly guitar, the music is brought to life. The "Brass and Leather" voice of Jim Morrison is alive and well in the vocal chords of The Ultimate Doors Lead Singer, Nash Stover. Not only does this incredibly talented performer look and sound like the original Doors frontman, but he's also very close in age to Morrison in his prime, and that youthful energy is clearly visible on stage!

Whether you grew up in the 60s and remember how Jim Morrison and The Doors changed the world, or if you're among the generations of fans that have embraced their music since Morrison's tragic passing in 1971, This is the Must-See show for you!