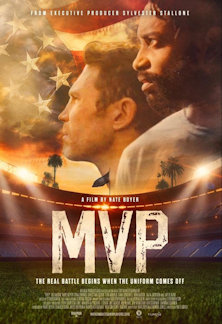 On the streets of Hollywood, a recently retired NFL player is saved from scandal by a homeless veteran. With their “glory days” behind them, the two men bond in search of purpose and identity. This film is inspired by the true story of Jay Glazer and Nate Boyer (who also stars and co-wrote this film), who, together, created ‘MVP’ (Merging Vets & Players), an organization that unites military veterans and former athletes to not only train at the gym but also to talk about shared mentalities, experiences and troubles that could result from assimilating back into — as Glazer puts it — “a less chaotic” life.

MVP was founded in 2015 by Glazer and Boyer, and the film “MVP,” directed by and starring Boyer, hopes to bring attention to the struggles both groups face and the outreach presented by the organization.

When the vet loses another Marine from his unit, will this new brotherhood be enough to save him from embarking on his own suicide mission? Will Phillips thinks he’s ready for his first year as a ‘civilian’ since retiring from the NFL. But the truth is, the league retired him. Now that he’s out of the NFL, Will’s ego is under attack, and his actions are becoming reckless. When a night of liquor and pills leads to driving his car through a tree, Will is saved by a man on a similar path.