The Magic of Michael Misko 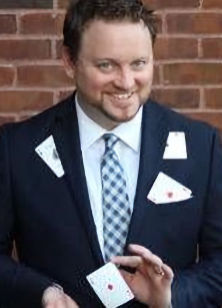 Michael Misko: Magician. Comedian. Cracker of Wise. brings you a unique blend of deft sleight-of-hand magic and charming, wry, comedy…peppered with a hefty dose of rapier wit! “90% Comedy. The other half is magic.” Once described as “the Zach Galifianakis of magic,” Michael’s greatest asset is the ability to combine comedy and sleight-of-hand technique to form an evening of pee-in-your-pants entertainment ….or so he was told by one little old lady. After seeing his show, renowned stand-up comic Brian Regan said, “I love the part where you harpooned the guy in the chest!” In 2015, Michael was hand-picked to create the role of the “Magic Maker” in the World Premiere of Stephen Schwartz’s Magic to Do (pictured above), and can be heard on the Original Cast Album, available on iTunes, Amazon, or Spotify.

Michael is a highly sought after consultant for Fortune 500 Companies, as he helps connect them with their employees and clients in an astonishing and memorable way. Some of his clients include Workday, Carnival Cruise Lines, CBS, bioMérieux, and UPMC Health Systems. Also, Michael performs on cruise ships, Universities, comedy clubs, and private functions all across the world.

The Strand is delighted to welcome back Michael Misko and his astounding brand of magic and hysterical comic antics with this FAMILY-FRIENDLY comedy and magic show!

The Magic of Michael Misko