Mandy Patinkin In Concert ‘Being Alive’ 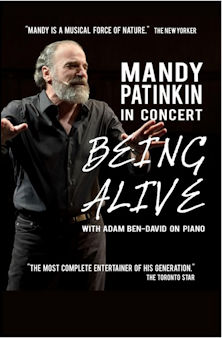 MANDY PATINKIN has established a long and storied career in theater, the concert stage, film, television, and as a recording artist. In his 1980 Broadway debut, Mandy won a Tony Award for his role as Che in Andrew Lloyd Webber’s Evita. Mandy’s many stage credits include: The Tempest, Enemy of the People, The Secret Garden, Leave It to Beaver is Dead, Hamlet, The Shadow Box, The Split, Savages, and Henry IV, Part I.  His films include Wonder, Smurfs: The Lost Village, The Princess Bride, Yentl, The Music of Chance, Daniel, Ragtime, Impromptu, Alien Nation, Dick Tracy, The House on Carroll Street, True Colors, and Maxie.

In television, Mandy was recently seen as Judge Wackner in the Paramount+ series The Good Fight. He won a 1995 Emmy Award for his performance in the CBS series Chicago Hope and starred in the CBS series Criminal Minds and in the Showtime Original Series Dead Like Me and Homeland as CIA Agent Saul Berenson. .

Mandy Patinkin in Concert: BEING ALIVE, presents the acclaimed actor/singer/ storyteller in his most electrifying role: concert performer. “Mandy Patinkin is in the business of showstopping,” raves The New Yorker, and that’s exactly what he does in this powerful, passionate evening of song. BEING ALIVEis a collection of many of Mandy’s favorite Broadway and classic American tunes. From Irving Berlin to Stephen Sondheim, from Cole Porter to Harry Chapin, Mandy takes you on a dazzling musical journey you’ll never forget.

The staff, board and volunteers of The Strand could not be more thrilled to welcome Mandy Patinkin to its intimate space. Nowhere else will you be able to experience this powerful, passionate concert where the furthest seat in the house is just 30′ away, and every seat is a ‘Gold Circle’ seat. It may be a once in a lifetime opportunity to see this amazing TV, film and Broadway legend in such an up-close-and-personal environment!

A Strand EXCLUSIVE! You won’t find this show downtown or anywhere else within 100 miles of Zelienople!