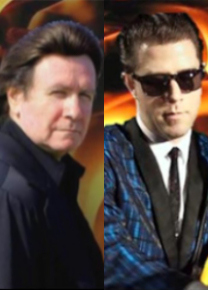 Terry Lee Goffee’s unparalleled tribute to country music icon Johnny Cash is so spot-on, he was recruited by the makers of the Guitar Hero video game series to motion-capture his moves for the ‘Johnny Cash’ character! Blair Carman has been called the best thing to happen to Rockabilly since Jerry Lee Lewis, himself!

The Staff and Volunteers at The Strand could not be more excited for the return of the exclusive team-up concert event: CASH & KILLER – TRIBUTE TO JOHNNY CASH & JERRY LEE LEWIS!

Johnny Cash has earned icon status in Classic Country and popular music. Jerry Lee Lewis had such energy and enthusiasm in his performances that he earned the nickname “The Killer” for the way he knocked out his audiences! Terry Lee and Blair will share the stage when they return for this stirring tribute to their respective music idols. Act 1 will showcase the high energy rockabilly sound of Jerry Lee Lewis and the Act 2 will showcase the classic country sounds of Johnny Cash

Whether you’re a fan of either of these iconic music legends, or just an engaged music lover, this exclusive pairing is a concert experience not to be missed!